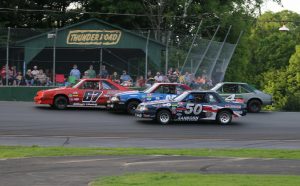 The series will open on Thursday, June 21 with a 50-lap event at Thunder Road as part of North Country Federal Credit Union Night. For the second event, the Twin State Series will head to Speedway 51 on Saturday, July 7 for the Jake McDowell Memorial 75.

END_OF_DOCUMENT_TOKEN_TO_BE_REPLACED 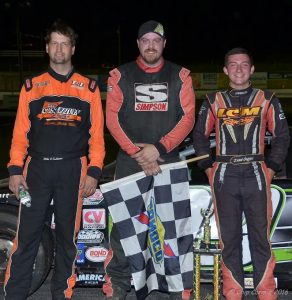 The Twin State 100 saw some new drivers on the roster adding to the variety seen in all of the GSPSS races started this year. George Bessette of Danbury, CT., Tommy O’Sullivan, of Wilbraham, MA., and local racer Jimmy Zullo of Claremont, NH all added their names to the list of already competitive list of drivers running.

Last years winner Derek Griffith and newcomer to Claremont, DJ Shaw set the pace early in the day, both attaining 13.9 lap times in practice. Mike O’Sullivan of Springfield, MA. and Bill Ahern of Bellerica, MA. started on the front row. Guy Caron of Lempster, NH took an early lead, showing his knowledge of the track. Griffith, Shaw, and Davis quickly made their way through the pack to the top five in the early laps of the race. Caron led for twenty-five laps until the first caution flew for Glenn Martel as he spun in turn two.
END_OF_DOCUMENT_TOKEN_TO_BE_REPLACED