“This is a special place for me, but to come and execute means a lot,” said McReynolds. “To have success at a track where my dad has had success is a special feeling.”

END_OF_DOCUMENT_TOKEN_TO_BE_REPLACED

DAYTONA BEACH, Fla. (Dec. 8, 2016) – NASCAR fans have been thrilled in recent years by the achievements of the sport’s rising stars – from Joey Logano’s DAYTONA 500 win in 2015 to Austin Dillon, Chase Elliott and Kyle Larson joining him in the 2016 Chase for the NASCAR Sprint Cup. Daniel Suarez won the NASCAR XFINITY Series championship this year and William Byron led the NASCAR Camping World Truck Series in wins.

They all have one thing in common. They cut their teeth in the NASCAR K&N Pro Series before breaking into NASCAR’s national series.
END_OF_DOCUMENT_TOKEN_TO_BE_REPLACED 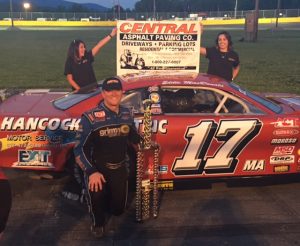 In what can only be described as a dominant performance, Eddie MacDonald won the American Canadian Tour’s Central Asphalt Paving Generation Next 151 race on Saturday, June 18 at Speedway 51 in Groveton, N.H. to capture his second win of the season. On Friday night, the Grimm Construction Chevy struggled with a very loose racecar to post a 13th place finish in the NASCAR K&N Pro Series East race at Stafford Motor Speedway in Stafford Springs, Connecticut.

After a hard crashed at Waterford Speedbowl a few weeks ago that required a new front clip on the Freddie Peterson owned EXIT Realty/Hancock Electric Motor Service Chevy, Eddie Mac and the crew were unsure how the car would respond in its first outing after being essentially rebuilt. They were quite pleased with the result as the “The Outlaw” posted the fastest time in practice and started seventh in the 150 lap event on the quarter mile oval.
END_OF_DOCUMENT_TOKEN_TO_BE_REPLACED

(Stafford Springs, CT)—When the NASCAR K&N Pro Series East returns to Stafford Speedway on June 17 for the NASCAR 150, the vast majority of drivers will be seeing the Connecticut half-mile for the very first time. For 20-year old Winston-Salem, NC native Ronnie Bassett, Jr. and the #04 Bassett Gutters team, the NASCAR 150 represents a prime opportunity to pick up their first K&N Pro Series victory. The road to NAPA Victory Lane for Bassett will begin on Thursday, June 16 as he and the rest of the K&N East Series drivers will partake in a test and tune session followed by a fan and media meet and greet during the WEEI 105.5FM Fan Experience.
END_OF_DOCUMENT_TOKEN_TO_BE_REPLACED

Eddie MacDonald and the Grimm Racing Team will open the NASCAR K&N Pro Series East season in the 5th annual Pittlite 125 at Bristol Motor Speedway on Saturday, April 16. Eddie Mac will pilot the Grimm Construction/Multiple Sclerosis Chevy in the first of the five race partial schedule the team will compete in this season.

Eddie Mac has achieved great success on “The World’s Fastest Half-Mile” posting a win in 2014, a seventh in 2013, and an impressive sixth place finish after recovering from a flat tire in last year’s race with the Rowley, Mass. veteran driver saying, “We love racing at Bristol and feel we have a chance to win every time we come here. We had a great car last year but got a flat (lap 49) to go a lap down but we came all the way from the rear to post a sixth place finish. Rollie (LaChance) has a great set up for Bristol so we hope we can run up front and be there at the end.”
END_OF_DOCUMENT_TOKEN_TO_BE_REPLACED