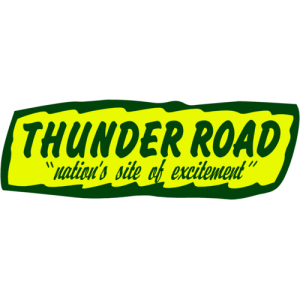 Barre, Vt. – Thunder Road officials announced today that both the Pro All Star Series (PASS) Super Late Models and the North East Mini Stock Tour (NEMST) have been added to the 56th Vermont Milk Bowl Weekend presented by Northfield Savings Bank in 2018. The two series will be part of a special “Milk Bowl Friday” event to be held on Friday, September 28.

It will be the second PASS North visit of the 2018 season to the Barre high banks, joining the Memorial Day Classic event that has been on the PASS calendar since 2015. For NEMST, they will make the trip to Thunder Road for the second time in their history and the first since 2013.
END_OF_DOCUMENT_TOKEN_TO_BE_REPLACED

The North East Mini Stock Tour kicked off its ninth season on Sunday at New Hampshire’s Lee USA Speedway. 30 cars entered the pit area for the largest car count in NEMST history at Lee USA. Following an early practice session the drivers would line up for time trial qualifying, something that has never been done before on the NEMST.

Qualifying kept the fans and drivers on edge with Brandon Gray turning a 17.08 lap early and holding the top spot while nearly 20 other competitors ran until he was knocked off by his NEMST veteran team mate and birthday boy Matt Sonnhalter. Sonnhalter ran a 17.04 lap barely beating his rookie team mate. Following time trials Sonnhalter drew the inversion chip of 3 rows which would put the Young Guns Racing teammates in 5th and 6th position and putting Mike Soucy and Glen Thomas on the front row leading the field to green.
END_OF_DOCUMENT_TOKEN_TO_BE_REPLACED

The NEMST has continued its growth across the east coast while providing the biggest and best races for mini stock competitors nationwide. The latest addition to the 2017 schedule is the first annual standalone 4-Cylinder Nationals event. The 100 green flag lap event will be the longest race in NEMST history and put driver, team, and machine at the maximum test to outlive the race.
END_OF_DOCUMENT_TOKEN_TO_BE_REPLACED

Saturday June 18 marked the first leg of the Temp Setters Mechanical Contractors Triple Crown which will also run at Speedway 51 on August 6th and back at Oxford Plains on August 28 for the HP Hood 250 weekend. The Texas Roadhouse mini stocks flocked through the gates at oxford alongside the Valenti Modified Racing Series and PASS Modifieds for a night of adrenaline filled racing action. Many new and part time competitors joined the NEMST presented by Twisted Tea for the 2nd Maine event of the 2016 racing season.
Two fields of 10 cars each rolled out to their heats with multi time heat race winner Haywood Herriott leading the way in his respective heat and Matt Sonnhalter holding on over a hard charging Emerson Cayer to win the second heat race. Haywood would draw an invert of 1 row placing the fast cars at the front while leaving himself in the 11th starting position according to series rules regarding current season feature winners.

END_OF_DOCUMENT_TOKEN_TO_BE_REPLACED

Bleak forecasts and gloomy skies surrounded the days leading up to the return of the North East Mini Stock Tour along with its sponsors Texas Roadhouse and Twisted Tea to the one third mile flat oval in Hermon, ME. The last race at Speedway 95 for the NEMST was held in May of 2009 the first year of the mini stock touring series which has since become one of the most recognized in New England.

That first day saw Justin Trombley take home the feature win, a driver that has had so many laps around the oval he could do it with his eyes closed. Fast forward to 2016. Trombley has decreased the number of tour races he competes in currently and the tour has drawn in the highest caliber of four cylinder competitors the region has to offer. Those competitors include Haywood Herriott and Zach Audet who both won their heat races during Sunday’s event, as well as 2 time champion Emerson Cayer and entering point leader Nick Maniatis.

END_OF_DOCUMENT_TOKEN_TO_BE_REPLACED

The 2016 season opener may have been postponed by two weeks however the competition garnered the extended off season bringing 27 tour style mini stocks to the Lee USA annual Governors Cup race. Veterans of the NEMST lead the way throughout Saturday practice with lap times approaching mini stock record speeds.
On Sunday the cars were unloaded and prepared for a single practice session before lining up for the 3 heat races. In practice the 19 driven by Zach Audet of Skowhegan hounded the 42, former Toby Wells car, that was purchased in the offseason by Jarrod Soucy an NEMST rookie. Other notable front runners were two-time champion Emerson Cayer, 2015 Rookie of the Year Haywood Herriott, Nick Maniatis, Matt Sonnhalter, and Mike Parker.
The heat races ran caution free with the teams of Nick Maniatis, Matt Sonnhalter, and Haywood Herriott. Nick Maniatis drew the invert chip of 3 rows following NEMST procedures and setting up a thrilling feature line up. 2 of the fastest cars in the field Jarrod Soucy and Mike Parker would make up the front row for the largest starting field in NEMST history.