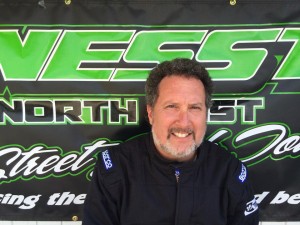 Bristol, CT’s Joe Arena is prepared for a run at the championship, while adjusting to a new race car. Arena is a former racer at New London-Waterford Speedbowl, but the rules package for the North East Street Stock Tour (NESST) is a bit different than what he’s used to driving. Says Arena, “I’m not used to driving the NESST car. There is more horsepower with these cars, and we need to cure our forward bite, which we were lacking at Lee [USA Speedway].”

Arena, who ran at Seekonk Speedway twice in 2014, and the NESST drivers will battle head-to-head against the Seekonk Speedway regulars, including Ryan Lineham. Lineham drives in the Pro Stock division for Mark Lundblad, but cut his teeth in the Street Stock division. Lineham states, “My career started in Street Stocks, and my passion for this division will never end. It has long been said by racers from New England, that Seekonk Speedway is the toughest track to drive, and toughest track to get a good car setup, so I would think Seekonk being my home track may be a slight edge for our team in this race. With that being said, this field of drivers in this tour are among the most talented of any tour in all of New England, so I hardly think I am a favorite, even with my Pro Stock experience.”

The pair of Street Stock stars are excited by the creation of the NESST, citing the need for a touring series with the Street Stock/Hobby Stock model. Lineham continues, “My passion has always been in Street Stock racing, and I think it is an incredible tour that has been established, with endless amounts of potential.”

Arena, who finished third in the non-points exhibition at Lee USA Speedway, May 17, exclaimed “I was very impressed with the NESST, with it being an upstart tour, gathering stars from Maine, Massachusetts, Connecticut, and New Hampshire, it’s quite impressive. Tech [Technical Inspection] was very impressive, and the group really works together well.”