HUDSON, NH – Derek Griffith continues his breakout year, racking up solid finishes on the Granite State Pro Stock Series, including his first four wins on the tour. In June, Griffith won in front of his hometown crowd at Hudson International Speedway, and is hopeful for another good run on August 23.

Griffith has lead the championship standings since the second race of the season, only finishing outside the top 6 once, at Speedway 51 after expiring a motor. The young star has had a season like no other driver in the tour’s history, and with only three races left, the 2015 championship is lurking in the back Griffith’s mind.
END_OF_DOCUMENT_TOKEN_TO_BE_REPLACED

WALPOLE, NH – The No. 37ME team that competes in the Granite State Pro Stock Series has been penalized for a rules infraction discovered during post-race inspection, June 14, at Hudson International Speedway. This infraction violates the following Section of the 2015 rule book:

12: Fuel
C. The “Official Fuel” will be supplied on-site at all GSPSS events and must be used for practice, qualifying and the race exactly as supplied by NERF. You will be fully responsible for any and all fuel purchased in bulk passing a fuel tech inspection.
END_OF_DOCUMENT_TOKEN_TO_BE_REPLACED 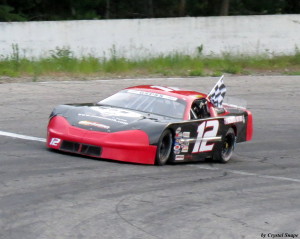 HUDSON, NH – Derek Griffith continued his stunning season, as the 18-year-old driver picked up his second victory of his career in the Gate City Classic at Hudson International Speedway.

Griffith led the field to green, with Matt Frahm matched to his outside. Mike Parks and Cory Casagrande made contact before the field completed one lap, with Parks spinning to the infield. One the restart, Griffith began to flex his muscles, jumping out to a quick lead, before series rookie Nick Boivin spun off turn 4, bringing out the second caution. The field would settle in for a long green flag run, until Casagrande and Jeremy Harclerode made contact on lap 41, erasing Griffith’s sizable lead. The final caution of the race occurred on lap 47, when George Helliwell and Mike O’Sullivan tangled off turn 2, subsequently ending O’Sullivan’s night.

END_OF_DOCUMENT_TOKEN_TO_BE_REPLACED

Hudson, NH’s “Joey Pole” worked his way up from the seventh starting position and got inside Tour point leader Wayne Helliwell Jr. on lap 74 of the 100-lap event. Pole completed the pass a lap later and motored away to win a caution-free race.

“You never really expect a race to go caution-free, but with this Tour, it can happen,” Pole said. “100 laps is kind of a short race for us, so our plan was to try and get to the front as quick as we could. But in the beginning I was battling with Travis Stearns and couldn’t really make much ground. So I backed off for a little while, and finally said ‘let’s try it again’.
END_OF_DOCUMENT_TOKEN_TO_BE_REPLACED

Gate City Classic an Important Piece to the Championship Puzzle

Gate City Classic an Important Piece to the Championship Puzzle

HUDSON, NH – With the point battle beginning to take shape early, the Granite State Pro Stock Series will travel to one of the most unique tracks on the circuit, Hudson International Speedway, for the Gate City Classic, June 14.

Young Gun Derek Griffith leads the standings entering the fourth of twelve events on the Granite State Pro Stock Series (GSPSS) schedule. Finishing in the top four in each race to begin the season, Griffith holds a slim two-point advantage over Barry Gray, and just eight points back to Larry Gelinas in third, entering the event. Hudson International Speedway is Derek Griffith’s home-track, but has yet to pick up a victory at the ¼ mile facility with the series, whereas Gelinas visited Victory Lane in 2014.
END_OF_DOCUMENT_TOKEN_TO_BE_REPLACED 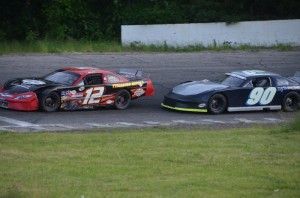 Griffith started 8th in his heat race and ran into trouble in the early going. Derek ended up finishing near the tail of the field in his heat race. This relegated Griffith to start 19th in the 20 car pro-stock field.

The No. 12 MOM’s of Manchester/LCM Racing/Tyngsboro Motors Toyota Camry did not waste any time picking off cars, one-by-one during the 100 lap event.

Derek was running in the top-5 for much of the race and took over the lead on lap 34 and led the field for a number of laps. This was to the delight of his hometown fans.