By Lisa and Rich Maguire

Last Saturday Wiscasset Speedway saw packed grandstands and some exciting racing action.  The bright lights lit up Maine’s fastest oval for the spotlighted race of the evening, the Amsoil Nelcar Legends National Qualifier.  Also on the schedule were the group one division of racing, including the Thunder Four Mini’s, ServePro of Biddeford Saco Prostocks, New England Four Cylinder Prostocks, and the Super Streets.

Starting of the evening was the thirty-five lap Amsoil Nelcar Legends Spotlighted feature.  Prior to race beginning, the drivers had first competed in time trials to determine heat position.  The heats finalized race start position, with the fastest at the front.  At race time start the cream had risen to the top, and the three front runners battled for a win.

From the start, the #19 of Kevin Girard Jr set a grueling pace with an average speed of about 78 mph.  Behind Girard was the #399 of Bob Weymouth.  Weymouth and third place starter, Matt Grant of the #84, gave Girard a challenge.  Girard was able to hold them off despite three cautions.   On the restarts, Weymouth and Grant fought for position.  Whoever started at the bottom of the track on the restart was able to advance to second using the inside advantage.  However, when the trio flew under the checkered, it was Girard in first, Weymouth in second, and Grant rounding out the top three.

END_OF_DOCUMENT_TOKEN_TO_BE_REPLACED 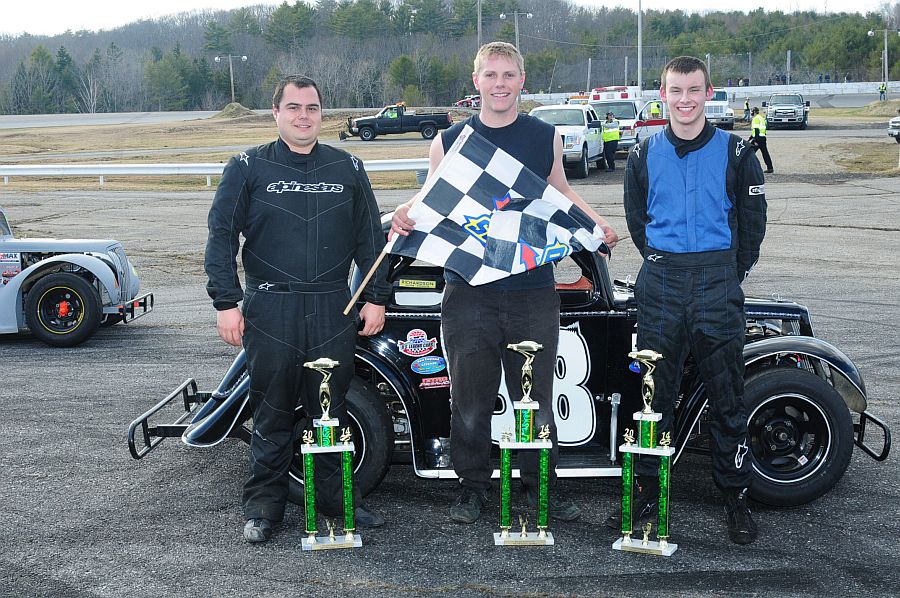 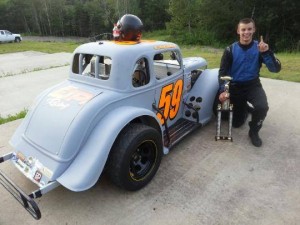 SCARBOROUGH, Maine – Reid Lanpher of Manchester, Maine, wrapped up the VIP Thursday Thunder season at Beech Ridge Motor Speedway in Scarborough, Maine, with a second-place finish in the 25-lap Amsoil NELCAR Legends Tour feature event last Thursday, August 22. It marked Lanpher’s third Top-2 finish in seven races at Beech Ridge this summer, and his fourth Top-5 over the same stretch. Lanpher had a late-race restart alongside the eventual winner, but the outside groove proved tough sledding and he settled in for the runner-up effort after starting 12th in the 19-car field. Lanpher started outside the Top-10 in all but two of the VIP Thursday Thunder series races.

REID, DID YOU THINK YOU HAD A SHOT TO WIN ON THE RESTART WITH FOUR LAPS REMAINING?
Honestly, it was kind of like a defensive game there. I knew that I didn’t really have anything for Matt (Bourgoine). Did I think I was as fast as him? Oh, definitely. I know just running alone I was as fast as him, but you have to be a lot faster than a guy to go around him on the outside. It’s four or five-tenths difference from the bottom to the top, so you’ve got to be selective of your moves and take advantage of the restarts.

I just protected the bottom and held onto second. I’m super-pumped about that.

WHAT HAPPENED WITH THE NO. 45 CAR EARLY IN THE RACE?
I got chopped pretty bad by a car that I guess didn’t have a left-side mirror, but it it what it is. He ended up wrecked, and I didn’t. It knocked the toe out pretty bad, but it was still good enough to come up through. I still managed a second-place finish, which I was really happy with after starting 12th.

WAS THIS A GOOD WAY TO WRAP UP THE THURSDAY NIGHT SEASON AT BEECH RIDGE?
Everybody’s giving it all they have at the end of the year for the last TNT race. I’m really pleased with the finish for where we came from.I had a really good car at the beginning of the race. I was trying to get my way through, just kind of bottom-feeding, because the car wasn’t very good on the outside. I was making due with what I had.
I feel good about the finish. I’m thankful to everyone that’s helped me out.

SCARBOROUGH, Maine – Reid Lanpher of Manchester, Maine, finished second in the Amsoil NELCAR Legends Tour 25-lap VIP Thursday Thunder feature event at Beech Ridge Motor Speedway in Scarborough, Maine, on Thursday, August 1. The finish was the fourth consecutive podium finish for the 15-year-old Lanpher, who won at Wiscasset Raceway on July 13 and then finished second twice in a span of three days at both Beech Ridge and Oxford Plains Speedway. Lanpher started 19th in the 20-car field and deftly worked his way through traffic to the runner-up spot. With one lap remaining, Lanpher had pulled to the rear bumper of the race leader when the field was given the combined yellow/checkered flags for a blown engine on another competitor’s car.

REID, WERE YOU HOPING THE RACE WOULD BE RESTARTED WITH ONE LAP REMAINING?
I could have won it, maybe. It’s just one of those things that could have gone either way. It could have played against me or it could have played for me. I would have liked to see a caution, but that’s racing. We’ll take that. We started 19th and got all the way to second in 25 laps. I’m pretty pumped about that.

DID YOU THINK THE CAR WAS GOING TO BE THAT GOOD AFTER FINAL PRACTICE?
We made some gains from the first practice, and we were selective in our adjustments. I think that worked out good. I was fairly confident going into the feature after the first practice session. Did I think we’d be good enough to get all the way to second? Maybe I’d have questioned that a little bit, but I’ll take it.

It is what it is. It’s so frustrating to get second eight times this year, but I can’t complain. There were 18 other cars out here that would have liked to have finished where we did.

HOW MUCH DID THE EARLY CAUTION FLAGS HELP YOU WITH TRACK POSITION?
Not being involved in the wrecks was big. I was going to take all the cautions I could get, to be honest, without being involved in any of them. I didn’t care if I had to restart on the outside lane or on the inside behind slow cars – I was going to take any cautions we could get and try and use them to my advantage.

OXFORD, Maine – Reid Lanpher of Manchester, Maine, posted back-to-back podium finishes on the Amsoil NELCAR Legends Tour, finishing second in both the VIP Thursday Thunder 25 at Beech Ridge Motor Speedway in Scarborough, Maine, on Thursday, July 18, and the 25-lap event at Oxford Plains Speedway in Oxford, Maine, on Saturday, July 20. Lanpher started at the rear of the 19-car field at Oxford after winning his heat race and ran out of laps to chase down the eventual winner. Two nights earlier at Beech Ridge, Lanpher again started deep in the field – 10th – and was in the runner-up spot by Lap 15. In the caution-free event, he simply ran out of time to make up enough track position to have a shot at the victory.