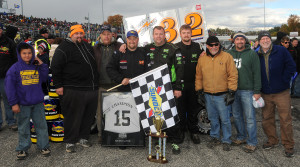 Randy Cabral pulled off “one for the ages” coming from last place in the NEMA feature to
pass teammate Todd Bertrand on the last lap at Thompson Speedway Motorsports Park’s
Sunoco World Series of Racing this past Saturday evening. In Lites action, Scott Bigelow
dominated the feature event, despite a late race charge from John Zych Jr. Zych, the
night before, was crowned the NEMA champion for 2015, and his father, John Zych Sr. the
owner’s champion. In the Lites division, Anthony Payne won his first series championship
and Bigelow won the car owners title.

In the NEMA feature, Todd Bertrand jumped out into the lead in the Tim Bertrand owned
#74 machine. He quickly paced the field, pulling out to nearly a half straightaway lead
at one poiNt. Further back, John Zych Jr. had charged from his ninth starting spot to
take over the second spot by lap eight. Randy Cabral, who started scratch on the field,
was also making his way through the field and would reach the third spot by lap
thirteen.
END_OF_DOCUMENT_TOKEN_TO_BE_REPLACED

Bridgewater, MA – This past Friday evening, NEMA made a return to Claremont Speedway. Beautiful weather, despite a grim forecast, and a professionally run operation greeted the winged warriors at the Speedway.

“I’m still at a loss for words. I don’t even know what to say,” were the first words from Jim Chambers on Saturday, following his first ever NEMA win at Claremont Speedway.
END_OF_DOCUMENT_TOKEN_TO_BE_REPLACED

A visit from NEMA Midgets and NEMA LITES packed the grandstands Saturday night. It was the Ames True Value Supply “NEMA Night”. The evening’s jam-packed schedule included two NEMA races and the Group 1 division: New England Four Cylinder Prostock, Prostock, Thunder 4’s, and NAPA Super Streets. The fans were able to go onto the track at 5:00 PM to meet with the drivers, get autographs, receive hero cards, and even to sit in the NEMA racecars.

NEMA club president, Russell Stoehr said, “This is a great facility, the fans are awesome and are very nice to us. We love coming up here this time of year and putting on a show for you guys. I hope to be coming back next year, all signs point to us coming back every year. This is the one of the most positive fan experiences we have all year long.”
END_OF_DOCUMENT_TOKEN_TO_BE_REPLACED

The Northeastern Midget Association heads to the famed Star Speedway in Epping, NH on Saturday night. It has been a favorite stop for the midgets since the 60’s, in fact Star has hosted more NEMA events than any other facility.

Some of the greats have gotten their first NEMA victory at Star including Joey Coy, Mike Favulli and Billy Mann, as well as modern day drivers like Jeff Horn, Joey Payne, Bobby Seymour and Russ Stoehr. There will be plenty of drivers gunning for their first on Saturday night.

Stoeher leads all active drivers with 10 wins at Star.

The NEMA midgets bring a see-saw battle at the top of the point standings in both of their classes.
The top spot has traded back and forth between young Avery Stoeher of Lakeville, MA and another Massachusetts South Shore native, Randy Cabral of Kingston. Cabral now leads by 13 points thanks to a runner-up finish last time out at Waterford. Stoehr could only muster a fourth place in that event and lost his grip on the points lead.

END_OF_DOCUMENT_TOKEN_TO_BE_REPLACED

“I’m looking forward to running with Greg & Russ Stoehr and Randy Cabral in 2012,” said Carlson. “I think there will be a lot of good racing in the 2012 season. I am very excited to get the chance to run with these guys.”

A multi time winner in 2011, Carlson will be coming to NEMA with his familiar, exceptional handling Drinan Chassis with an Esslinger powered “spec” engine – becoming a popular choice for the economics involved.
END_OF_DOCUMENT_TOKEN_TO_BE_REPLACED

Northeast Midget Association action has been as hot in the off season, as it was on the track in 2011. Last week, 2003 NEMA champion and long-time open wheel standout Joey Payne announced that he will be returning full time to the circuit in 2012 aboard the Ed Breault owned #44.

“I had a decent year in 2011,” stated Payne. “We raced Oswego full time, finishing 6th in points with one win. We also had some bad luck, after falling out of the $10,000 to win Mr. Supermodified race with a flat while leading with 20 laps to go. The Classic was another let down, running 2nd for 100 laps and losing the rear end. Ed Breault asked me to drive the last three races of the year, and we didn’t have good luck either, but we had a blast,” said Payne.

With plans to run full time schedules with NEMA, at Oswego (Muldoon Racing) and quarter midgets with his son Anthony at Wall Stadium, Payne will certainly have his hands full this season. His goals are also very clear, “I’d like to win some races at Oswego, and make it back to victory lane with NEMA,” said Payne.

Citing his father as his biggest inspiration in racing & his family for their support, Payne also heads up a long list of NEMA competitors that credit their families with their success & passion for the sport.

As for the familiar, blue Breault #44, the car will carry its flagship Crown Collision banner, in addition to Seymour Enterprises, No Regrets Ink and Bell Helmets. Ed & Lou Breault will continue to take care of the car during the week, in addition to assistance from Mike Scrivani, Dave Shore & Jason Parsons.