WEST HAVEN, Vt. – The traveling stock car stars of the American-Canadian Tour (ACT) will return to the Asphalt Track at Devil’s Bowl Speedway twice in 2017. Having just completed its 25th season, one of the premier Late Model racing series in North America will battle in a pair of exciting events at the fast Vermont half-mile that has become a favorite of drivers and fans alike.
END_OF_DOCUMENT_TOKEN_TO_BE_REPLACED

WEST HAVEN, Vt. – Devil’s Bowl Speedway has made some adjustments to its weekly stock car racing divisions for the 2017 NASCAR Whelen All-American Series season. The changes are the latest step in an unending process of improving the quality and entertainment value of events at both the half-mile Asphalt Track and the 3/10-mile Dirt Track at the Vermont facility, with several additional enhancements to be announced soon.
END_OF_DOCUMENT_TOKEN_TO_BE_REPLACED

WEST HAVEN, Vt. – Jason Durgan and Vince Quenneville Jr. put on the most dramatic stock car show of the year at Devil’s Bowl Speedway on Sunday, September 11. The two veteran drivers were the stars of the half-mile Asphalt Track during the Rutland County facility’s 50th season of racing and needed a tiebreaker to determine the track champion at the Vermont 200 Weekend. Durgan, of Morrisonville, N.Y., became a first-time Devil’s Bowl titleholder in the NASCAR Whelen All-American Series and will share the championship stage this winter with Josh Masterson, Jim McKiernan, and rookie Eric Messier.

Durgan and Quenneville entered the two-day Asphalt Track finale tied in point standings, but Morrisonville, N.Y., racer Durgan pulled ahead by two points after a 50-lap race on Saturday afternoon. In Sunday’s “Leon Gonyo Memorial” 50-lapper, defending champion Quenneville, of Brandon, Vt., did all he could by winning the race – his fourth score of the year – as Durgan’s car struggled in traffic. END_OF_DOCUMENT_TOKEN_TO_BE_REPLACED

WEST HAVEN, Vt. – Wayne Stearns used a strong racecar and a bit of patience to earn his first career NASCAR Whelen All-American Series victory at the Dirt Track at Devil’s Bowl Speedway on Sunday, September 11. The Bradford, Vt., veteran earned his win in the “Vince Quenneville Sr. Memorial” on Interstate All Battery Center of Rutland Night. Matt Mosher, Jason Porter, and Brett Wood also went to the winner’s circle during the event. END_OF_DOCUMENT_TOKEN_TO_BE_REPLACED 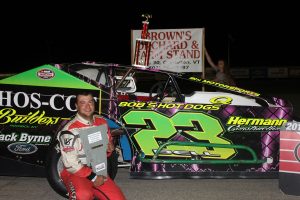 WEST HAVEN, Vt. – Alex Bell left little doubt about the strength and speed of his racecar on Saturday, August 20 at Devil’s Bowl Speedway, winning in NASCAR Whelen All-American Series competition for the first time in three years. Bell scored on the half-mile Asphalt Track at Devil’s Bowl on Brown’s Quarried Slate/Brown’s Orchard & Farm Stand Night, along with Brad Bertrand, Chris Bergeron, and Scott FitzGerald.
Bell was simply dominant in the 30-lap main event for the Bond Auto Parts Sportsman Modified division. The Cambridge, N.Y., racer started in third place and took the lead from Dave Snow at lap 7, then left the field in his wake to open up a half-lap lead. The caution flag waved for two big wrecks on laps 25 and 26 and brought Bell back to striking distance for a pair of restarts, but he was never seriously challenged and drove his No. 23 Hos-Cot Builders/Hermann Construction car to his first win at Devil’s Bowl since May 31, 2013.
END_OF_DOCUMENT_TOKEN_TO_BE_REPLACED

WEST HAVEN, Vt. – Bobby Hackel blew the fans and the competition away at the Dirt Track at Devil’s Bowl Speedway on Sunday, August 14, becoming just the second stock car driver in the track’s 50-season history to win in two divisions on the same night. The 21 year-old from Rensselaer, N.Y., swept both the 35-lap feature for the NASCAR Whelen All-American Series Sportsman Modifieds and the 30-lap race for the Sprint Cars of New England. Also winning at the Liberty Street Discount Beverage & Deli Night event were Josh Coonradt and Mike Ryan.

Hackel got his work started in the Central Vermont Motorcycles Sportsman Modifieds, when he came from 13th starting position to challenge leader Kevin Chaffee of Bradford, Vt., at lap 13. It was West Sand Lake, N.Y.’s Kenny Tremont Jr. to make the first move, though, as he passed both Hackel and Chaffee to take command at lap 17. Hackel followed Tremont through traffic for the next 17 laps, with Tremont’s lead growing and shrinking as the pair navigated lapped traffic.
END_OF_DOCUMENT_TOKEN_TO_BE_REPLACED