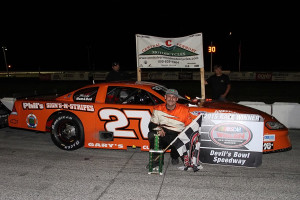 Morrisonville, NY native Durgan won the first Modified feature in dominant style, leading all but the opening two laps. He was all by himself up front when a restart with six laps remaining brought Leon Gonyo, Vince Quenneville Jr., and the rest of the field to his bumper, but he blasted away from the pack to cruise to the win. Quenneville, of Brandon, VT, squeezed by Chazy, NY racer Gonyo for the runner-up spot; Greg Atkins finished fourth with Ron Proctor fifth.

Proctor, of Charlton, NY, rode the outside lane in a wild, crash-marred nightcap. Whiting, VT’s Jimmy Ryan held a big lead over Cody Sargen and Proctor during a long green-flag run; Sargen held second as Proctor committed to the outside for more than 15 laps trying to pass. Proctor finally cleared Sargen at lap 24, just before contact from Durgan’s car sent Sargen hard into the concrete retaining wall at a sharp angle; Sargen was alert and walked with assistance to an ambulance before going to a local hospital for observation.

Ryan and Proctor battled at the final restart before Proctor – again on the outside – took the lead from Ryan with two laps left and drove to the win; it was Proctor’s second first victory of the year and his first since the recent passing of his crew chief Ron White. Hometown favorite Billy Lussier of Fair Haven, VT ran inside the top five throughout the race and finished a career-best third. Atkins, after a long battle with Lussier, finished fourth for the second time of the night, and Jason Furman had a career-best showing in fifth place.

Chris Bergeron of Claremont, NH ended a nearly two-year dry spell in the 30-lap Central Vermont Motorcycles Late Model division feature after holding off Todd Stone of Middlebury, VT for the win. Former track champion Bergeron was sidelined midway through last season with a knee injury, then missed the 2015 season opener while battling kidney stones. He held off a late charge from Stone for the win.
“The car has been good this year, but the driver is getting older,” Bergeron said with a laugh in victory lane. “But I feel pretty good right now.”

Josh Masterson of Bristol, VT finished third with Jamie Aube on his bumper. Lance Allen finished fifth after a long fight with rookie Richard Lowrey III and Chad White. Aube and Allen were each in their first starts of the season.

Defending track champion Robert Gordon of Milton, VT grabbed his second win of the year out of the hands of Jason McClatchie in the 25-lap Brileya’s Chrysler-Jeep Renegade division feature. In spite of overheated brakes, Gordon chased McClatchie down and stole the lead with two laps remaining. McClatchie, of Plattsburgh, NY, settled for second place with Jim McKiernan, Scott FitzGerald, and Dylan Rabtoy in tow.

Chris LaVair of Saranac Lake, NY took his second-straight win in the Portland Glass Mini Stock division after a 15-lap race. John McCarron and rookie Brad Bertrand had an entertaining battle for second, which went McCarron’s way. Andrew FitzGerald and Tanner Crary were next in line.
The New England Antique Racers club made its annual visit to Devil’s Bowl Speedway with a nice field of retro racing machines. Bob Seward of Lee, MA drove his 1937 Plymouth coupe to a win in the 12-lap Sportsman race over Barry Roy and Allen Davis, while Bob Donahue of Jaffrey, NH drove his Pinto-bodied 1982 Troyer chassis to the 12-lap Modified win over Scott Poirier and Richard Trempe.