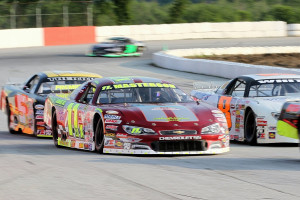 WEST HAVEN, VT – Local stock car drivers will feel double the pressure at Devil’s Bowl Speedway on Friday night, July 10, as The Rutland Herald presents the annual Mid-Season Championships at 7:30 p.m. Point values will be doubled, making every position twice as critical in all four divisions of the NASCAR Whelen All-American Series presented by Yandow Sales & Service and John Deere.

Because of the greater point values, the Mid-Season Championship is viewed by many as a “make or break” event that sets up the second-half stretch drive toward the titles. The winners of Friday night’s feature events will score 100 points toward the championship, with each subsequent position decreasing by four points. Preliminary heat races are each worth 10 points to win.

The Bond Auto Parts Modified division has a four-way fight for the championship. Ron Proctor, Vince Quenneville Jr., and Joey Roberts have each held the lead during the first half, while Greg Atkins lurks close behind in fourth place. Entering the Mid-Season Championships, Charlton, NY racer Proctor holds a 12-point advantage on Quenneville, with Roberts 21 markers back and Atkins 27 behind. The top-three drivers have each won races this season – Proctor twice – and Atkins has finished fourth or better in each of the last five races. Leon Gonyo ranks fifth overall, 30 points behind Atkins.
The Central Vermont Motorcycles Late Model division has a close two-man race up front, with Addison County drivers Josh Masterson and Todd Stone separated by only five points. Each has a win to his credit, and they are the only two drivers to finish every race inside the top five this season. Robert Bryant Jr., Walt Hammond Jr., rookie Richard Lowrey III, and veteran Steve Miller sit in positions 3-6, just 11 points apart.

Robert Gordon of Milton, VT is in search of his third Devil’s Bowl championship in the Brileya’s Chrysler-Jeep Renegade division. His three victories have helped him build a 20-point cushion over Scott FitzGerald of West Rutland, VT, but the margin is far from enough to allow Gordon to relax. Rookies Matt Monaghan and Shawn Franklin are third and fourth, respectively, with Jason McClatchie fifth.

It’s a LaVair family affair in the Portland Glass Mini Stocks, with two members of the Gabriels, NY clan atop the point board. Chris LaVair rides a four-race win streak into the Mid-Season event and has a comfortable 56 point edge on his father, Harold. Rookie Brad Bertrand is only three points behind Harold LaVair in third place, followed closely by Chuck Bradford and Andrew FitzGerald.
Friday’s event won’t be strictly business, however, as drivers from all four divisions will meet with fans of all ages during the annual Rutland Herald Driver Autograph Session at intermission. In addition, the Rutland Area Vehicle Enthusiasts (RAVE) club will show off a handful of its hot rods and classic cars as a prelude to its annual Car Show and Auto Flea Market at the Vermont State Fairgrounds in Rutland on July 11-12.