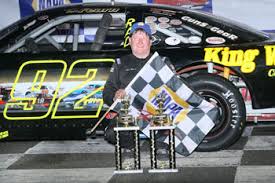 (Stafford Springs, CT)—Stafford Speedway returned to NASCAR Whelen All-American Series racing action with Girls Night Out / Intrepid Fallen Heroes Fund Track Walk program with all 6 divisions in action plus a track walk that raised money for the Intrepid Fallen Heroes Fund. Taking down feature victories were on the night were Ryan Preece in the SK Modified® feature, Michael Bennett in the Late Model feature, Stephen Kopcik in the SK Light feature, Al Saunders in the Ltd. Late Model feature, Marcello Rufrano in the DARE Stock feature, and Dana DiMatteo in the Legend Cars feature.

In the 40-lap SK Modified® feature event, Joey Cipriano led the field to the green and he took the early lead with Todd Owen on his outside in second. Keith Rocco spun coming off turn 4 to bring the caution out with 2 laps complete. Rocco was able to rejoin at the rear of the field after a pit stop.
Cipriano again took the lead with Owen slotting into second. Eric Berndt was side by side with Ted Christohper for third and Ryan Preece and Rowan Pennink were side by side for fifth behind them. With 6 laps complete, Cipriano was pulling away from 5 rows of side by side cars. The side by side got sorted out on lap-8 with Preece getting by Berndt to move into second. Owen was fourth and Ronnie Williams was on his outside in fifth.

Preece was beginning to reel Cipriano in at the front while Owen and Williams were putting on a whale of a battle for fourth place. Williams was able to finally take the spot from Owen on lap-12 and Pennink also got by Owen to drop him back to sixth.
Preece went around Cipriano to take over the lead on lap-15. Cipriano stayed glued right to Preece’s back bumper and he made a bid for the lead in turn 4 on lap-16 but fell back into line in second. Berndt was still third with Pennink and Williams behind him.

Cipriano was keeping pace with Preece about a car length or two behind with Pennink by himself in third and Williams was hounding Berndt for fourth palce with 25 laps complete in the race.
With 10 laps to go, Preece had begun to pull away while Pennink was all over the back bumper of Williams in a fight for second. Pennink made his move on lap-32 to take over second but Preece had nearly the full length of the straightaway for a margin back to Pennink.
Preece took the checkered flag to pick up his second consecutive victory of the 2015 season. Pennink finished second with Cipriano, Williams, and Berndt rounding out the top-5.

In the 30-lap Late Model feature event, Michael Wray spun in turn 2 to bring out the caution before a lap could be completed. Ed Ricard and Michael Scorzelli led the field to the restart and were side by side for a lap before the caution came out again for a spin by Kevin Gambacorta on the frontstretch.
Ricard took the lead with Josh Wood moving into second and Michael Bennett moving up to third. Tom Fearn was fourth and Tom Butler was fifth as Scorzelli fell from second back to sixth. Wood moved by Ricard to take over the lead on lap-3 and the train of Bennett, Fearn, and Butler all followed Wood by as Ricard fell back to fifth place.

The action continued at the front as Bennett went by Wood to take over the lead on lap-6. Fearn followed Bennett by Wood with Butler and Ricard now lined up behind Wood.
With 10 laps to go, Bennett had a comfortable lead over Fearn with Wood, Ricard, and Butler still giving chase. Bennett led the field back to the checkered flag to pick up his division leading fifth win of the 2015 season. Fearn finished second, with Ricard, Butler, and Kevin Gambacorta rounding out the top-5.

In the 20-lap SK Light Modified feature event, Geoff Boisjolie looked like he was shot out of a cannon as he streaked into the lead with Stephen Kopcik and Wesley Prucker giving chase. The caution came out with 1 lap complete as Tony Membrino, Jr. spun in the middle of turns 1+2.

Boisjolie took the lead back under green with Kopcik dueling with Prucker for second before getting clear into second. Prucker was now locked in a duel with Bob Charland, which he got the better of to take over third. Charland was now fighting with Glenn Griswold for fourth when the caution came out with 11 laps complete for Carlos Gray, who spun in turn 2.

Boisjolie again took the lead with Kopcik giving chase. Kopcik got a good run through turns 1+2 on lap-15 but he couldn’t make a pass on Boisjolie. Kopcik then pulled alongside Boisjolie on lap-16 and they ran side by side with neither driver giving an inch. With 2 laps to go they were dead even at the line. They took the white flag with Kopcik ahead by a nose. Kopcik got clear of Boisjolie in turn 3 of the final lap but Boisjolie nearly made a crossover move coming to the checkered flag but Kopcik held him off for his first win of the 2015 season. Payton Henry came home third, with Griswold and Charland rounding out the top-5.

In the 20-lap Limited Late Model feature event, David Comeau took the lead at the drop of the green while Kelsey Rottino had to battle with R.J. Surdell side by side for a lap before taking second. Robert Bloxsom, III was now side by side with Surdell for third, but the caution came out with 2 laps complete as Glenn Bartkowski spun in turn 1 and as his car was spinning he made contact with Jeremy Lavoie’s car.

Comeau and bloxsom got hooked together on the restart to bring the caution right back out. The next restart saw Rottino take the lead at the green but Al Saunders made a 3-wide bid in turn 3 to move by both cars and take over the race lead. Justin Bren followed him by and took over second with Paul Arute in third and Duane Provost in fourth. Rottino spun on the backstretch and collected the car of Cliff Saunders to bring the caution back out with 5 laps complete.

In the 15-lap DARE Stock feature event, Marcello Rufrano took the early race lead with Zack Robinson right behind him. Nicole Chambrello spun in turn 3 to bring the caution out with 1 lap complete.
Rufrano and Robinson were side by side in a fight for the lead back under green while Dan Dembek moved into third. Tyler Trott made a 3-wide move to get by Alexandra Fearn and Phil Evans and move up to fourth. Fearn and Trace Beyer spun in turn 3 to bring the caution back out with 3 laps complete.
Rufrano and Robinson resumed their duel for the lead on the restart, but the field could only get one more lap completed before the caution came back out for a spin by Phil Evans in turn 2.

Rufrano took the lead with Robinson slotting into second behind him on the restart. Trott got a good run in the outside groove and h epulled alongside Dembek in a fight for third with Frank L’Etoile, Jr. right behind both cars in fifth. Trott made the pass stick on lap-7 to move into third with Dembek and L’Etoile behind him as Rufrano continued to lead Robinson.

Rufrano maintained a 2 or 3 car length gap back to Robinson over the final laps and he drove to his very first DARE Stock feature victory. Trott finished third, with L’Etoile and Dembek rounding out the top-5.

In the 20-lap Legend Cars feature, Noah Korner set the early pace with Mikey Flynn, Dana DiMatteo, Devin O’Connell, and Scott Joy rounding out the top-5. DiMatteo made a move to the inside of Flynn to move into second on lap-7. DiMatteo then closed in on Korner and took the lead from him on lap-9. O’Connell followed DiMatteo by as Korner fell from the lead back to third. Joy was still fourth with Cory DiMatteo now in fifth. The caution came out with 17 laps complete for a spin by Jerry Macchia.
Dana DiMatteo took the lead back under green but only one lap could be completed before the caution came back out for a spin by Joy.

Dana took the lead again back under green with O’Connell right on his back bumper. DiMatteo held O’Connell off to the checkered flag to pick up his fourth win of the 2015 season. Cory DiMatteo finished third, with Korner and Teddy Hodgdon rounding out the top-5.