(Halifax, NS, September 11, 2013) The Parts for Trucks Pro Stock Tour will close out another sensational season this Saturday at Scotia Speedworld with the Dartmouth Dodge 200. After 12 events in five cities, over 40 competitors and 1,650 feature laps, it all comes down to the final 200 circuits to decide who will be crowned the 2013 Parts for Trucks Pro Stock Tour Champion – and who will cash the $10,000.00 cheque! Qualifying for the Dartmouth Dodge 200 gets underway at 3:10 PM with the Atlantic Tiltload Time Trials followed by championship racing set for 4:00 PM. Grandstand gates open at 1:00 PM.

Three-time series champion John Flemming (Halifax, NS) enters the Season Finale Dartmouth Dodge 200 with a 49 point lead over fellow three-time series champ Shawn Tucker (Fredericton, NB). Tucker has been dominating the second half of the season but even if he is able to pull off his fifth win of the season and take the Linde Most Lap Led Award, it would give him the maximum 210 points, meaning Flemming will still only need to finish 19th or better in order to take home his fourth title.
END_OF_DOCUMENT_TOKEN_TO_BE_REPLACED 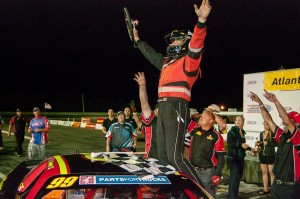 (Halifax, NS, August 10, 2013) – It was an emotional night for Terence Bay’s Craig Slaunwhite as he drove his #99 Halifax Glass and Mirror Chevrolet Impala to victory in the 14th Annual Atlantic CAT 250 for the Parts for Trucks Pro Stock Tour. This is Slaunwhite’s first Atlantic CAT 250 victory and had to battle another hometown favorite in Enfield’s Shawn Turple for the victory. Turple brought his Chevrolet home in second, followed by Fredericton, NB’s Shawn Tucker, Turner, Maine’s Ben Rowe and Charlottetown, Prince Edward Island’s Darren MacKinnon.

Rowe began his afternoon with setting the pace in the Atlantic Tiltload Time Trials with a 14.310 second lap. After a redraw for the King Freight Lines Dash for Cash, it was Slaunwhite who went to victory lane in the qualifier for the top eight Time Trial competitors and earned the right to start the 250 lap feature from the pole position. Donald Chisholm (Antigonish) and Exide Batteries Rookie of the Race Dylan Blenkhorn (Truro) took home Dartmouth Dodge Heat Races. Slaunwhite led 165 laps to take the Linde Most Laps Led Award. Springvale, PE’s Greg Proude gained 13 positions and finished in 6th position to earn the Absolute Traffic Hard Charger Award. Three leaders swapped the lead six times in a 250-lap race which featured eight caution periods.
END_OF_DOCUMENT_TOKEN_TO_BE_REPLACED

(Halifax, NS, August 8, 2013) The Atlantic Cat 250, Halifax’s most anticipated stock car racing weekend of the season, returns to Scotia Speedworld this Friday and Saturday for two days of full throttle excitement! The two day event will attract over 5000 fans and the best stock car drivers from the Maritimes and abroad. Friday night the Dartmouth Dodge Sportsman will kick things off as they go head to head on the 3/10th mile oval for 100 laps in the Dartmouth Dodge 100. On Saturday race fans will see the stars of the Parts for Trucks Pro Stock Tour battle for 250 grueling laps in the weekend’s main feature, the Atlantic Cat 250, which has a posted purse of over $50,000.00! Gates open at 5:00 PM on Friday, qualifying for the Dartmouth Dodge 100 will begin at 7:30 PM. Gates open at 2:00 PM on Saturday with Atlantic Tiltload Time Trials for the 14th Annual Atlantic CAT 250 at 4:10 PM.

(Halifax, NS, July 31 2013) The Parts for Trucks Pro Stock Tour will make its first and only visit to Prince Edward Island this Saturday for the Exit Realty PEI 100 at Oyster Bed Speedway; round eight of 12 for the Maritime based touring series. Eight Island drivers are expected to be in the field this Saturday, including Jonathan Hicken (Brudenell, PE) who won at his home track last summer. Qualifying for the Exit Realty PEI 100 gets underway with Atlantic Tiltload Time Trials at 5:10 PM, racing action at 6:00 PM.

John Flemming (Halifax, NS) continues to lead the point standings and has amassed a substantial point lead over current series champion Shawn Turple (Enfield, NS). Flemming sits in top spot with 1407 points, 81 markers ahead of Turple’s 1326. Shawn Tucker (Fredericton, NB) sits in third just five points behind Turple but is carrying momentum having won the last two races, including the prestigious IWK 250 in which he beat out NASCAR Sprint Cup Champion Brad Keselowski for the marquee victory.

Positions fourth through seventh belong to Island drivers. Greg Proude (Springvale, PE) leads the six full-time Island driver contingent, followed by Dylan Gosbee (Cornwall, PE) who won his first career Pro Stock victory just over a month ago which vaulted him to fifth in points. Darren MacKinnon (Charlottetown, PE) sits in sixth followed by Jonathan Hicken in seventh. Just 23 points separates these four drivers, all of whom will be looking to turn heads at their home track.
END_OF_DOCUMENT_TOKEN_TO_BE_REPLACED

(Halifax, NS, July 17, 2013) The Parts for Trucks Pro Stock Tour returns to Riverside International Speedway this Saturday, July 20th for the prestigious IWK 250 presented by Steve Lewis Auto Body. This marquee event will feature current NASCAR Sprint Cup Champion Brad Keselowski. Thirty-four drivers from five Canadian provinces and two states in the U.S. have pre-registered for the event with a purse of more than $93,000. The IWK 250 will mark round seven of 12 in the chase for the Parts for Trucks Pro Stock Tour Championship. Grandstand gates and box office for the IWK 250 open at 12:00 PM; Atlantic Tiltload Time Trials will get underway at 3:30 PM followed by an on-track autograph session and concert. Pre-race festivities start at 7:00 PM.

NASCAR champ Keselowski will work a rare off-weekend from his No. 2 Miller Lite Ford ride in the NASCAR Sprint Cup Series to make an even more rare start at the IWK 250. Keselowski will pilot the No. 13K Cat Car for Kids this Saturday. The Cat Car for Kids program, presented by Atlantic Cat, was initiated in 2008. Prior to race day the car and Keselowski will visit the IWK Health Centre where patients and their families can sign the car as co-sponsors; the annual visit has become a ‘signature’ event on the hospital calendar. The IWK 250 has raised awareness and more than $130,000 for the IWK Health Centre since 2007.
END_OF_DOCUMENT_TOKEN_TO_BE_REPLACED

John Flemming (Halifax, NS) took home his third win of the season last weekend in Geary, New Brunswick during the Irving Blending & Packaging 100 after making an outside pass on Shawn Tucker (Fredericton, NB) in the closing laps of the event. For Tucker, it was the second consecutive race he was involved in the final lead change of the night, only to finish second when the checkered flag flew. Two weeks ago at Petty International Raceway, Tucker was passed on the last lap of the Lucas Oil 150 by eventual first-time winner Dylan Gosbee (Cornwall, PE).
END_OF_DOCUMENT_TOKEN_TO_BE_REPLACED